Last May, Melissa (my wife) and I headed south to Disneyland to celebrate our anniversary. We were joined by some friends, while we spent 5 days in the parks. Over the next few Saturdays, I’ll be recapping that trip and trying to add a few opinions into the posts, as well. Enjoy! You can find part 1 and 2 on our Trip Reports page.

After an evening at the beach, we returned to the parks.  We went during the hottest week of the spring (it was right around 100 for half the week) so that added to our slower pace.  After sleeping in, and with the heat in mind, we started our day off with Dole Whip. 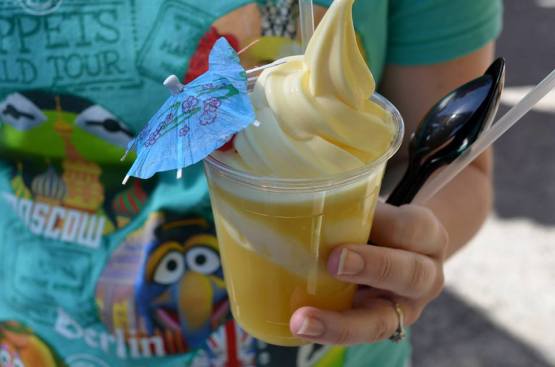 If you have never had Dole Whip before, that’s reason enough for the $100 it takes to get into Disneyland and buy a Dole Whip.  Just kidding, sort of.  Dole Whip is soft-serve pineapple ice cream.  I prefer the Dole Whip Float, which my lovely wife is holding above.  This is one of my favorite snacks at any Disney park and while the writers on here can fight over where to put Star Wars Land, we can all agree on Dole Whip.

After the Dole Whip was gone or melted all over our fingers, it was time to hop aboard the Disneyland Railroad.  It had been a few years since I had rode the railroad and I was eager to take a loop around the park.  I think there’s a pretty decent argument to be made that the Disneyland Railroad is the most nostalgic part of the whole resort.  Once on it, I find it hard not to step back in time and really get swept up by the amount of people who have rode this before me. 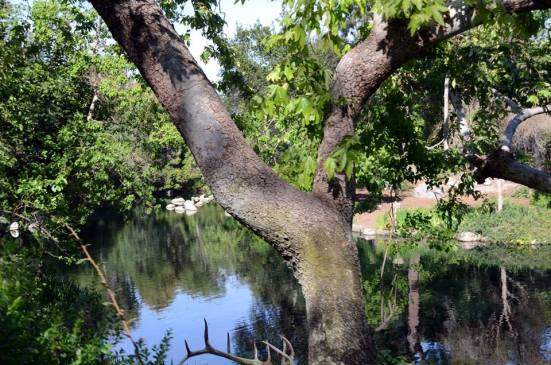 Of course that’s only half of the nostalgia.  Walt Disney’s love of trains has been stated on every Disney website it seems, but that doesn’t mean it’s not important.  Going back to our question of the week last Sunday, I think it’s obvious that each of us truly care about Walt’s vision of the park.  The railroad is something he loved and truly cared about.

Getting into The Disneyland Railroad specifically, I think it’s a must-do.  While I might save some details for a specific post about the railroad, I think the ride around the park gives an excellent view of parts you can’t see anywhere else.  Going inside Splash Mountain, seeing the green nature between the New Orleans Square and Toon Town stops, and getting a look at some Dinosaurs are just another part of what makes the railroad special. There are some great views along the way, as well.

After a loop on the train, we headed back into Adventureland to continue our afternoon in Disneyland.  Next on the agenda was a trip through the worlds most famous rivers on the Jungle Cruise. 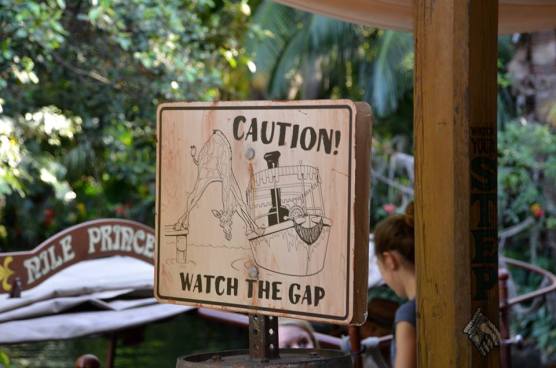 Speaking of classic attractions, this is about as classic as you get.  The picture above is one of my favorites from the trip.  The Jungle Cruise ride itself is great, but the attraction begins as soon as you step inside the queue (the line).  Like most Disney attractions, the queue area is full of detail.  I love the signs inside of the Jungle Cruise.  While this isn’t my favorite line to stand in (it does get really hot) it is pretty great. Be sure to catch on to the story behind the attraction as you walk through it.

The ride itself is wonderful and can be covered in detail at another time.  If you don’t know what the Jungle Cruise is, it’s a boat ride through famous rivers.  On the banks and sometimes even in the rivers are animals.  Now, the animals may be fake but they are up to all kinds of tricks.  As you go, the skipper of the boat is full of puns that you should probably laugh at if you have a soul.  When Walt was overseeing the building of this ride, he wanted to put real animals in this ride.  Unfortunately, that was pretty unrealistic but it did help spur the idea for Kilimanjaro Safaris in Animal Kingdom.

I don’t know these kids (not to be a creeper), but I really like this picture.  While Jungle Cruise at night is a blast, it’s always pretty fun to ride on with younger kids on board.  Most of the jokes go right over their heads but they are always so fascinated by the animals on the ride.  Who could blame them? Hippos are rad.

After the ride, it was back to our wandering through the left side of the park.  We walked through the rest of Adventureland and then moved on to the Mark Twain Riverboat on the Rivers of America. 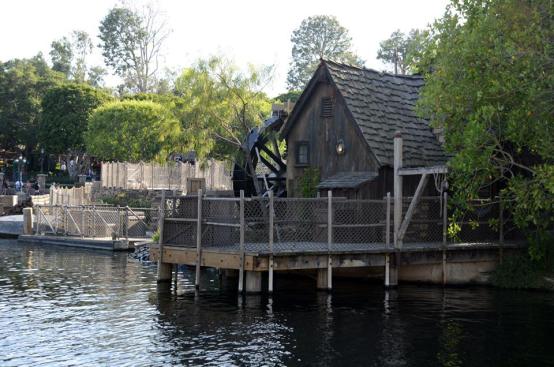 Much like the Disneyland Railroad, the riverboat gets a little bit overlooked.  The attraction provides a place to relax and slow down.  It also gives you a little bit of a breeze as you’re right on the water, circling Tom Sawyer Island. 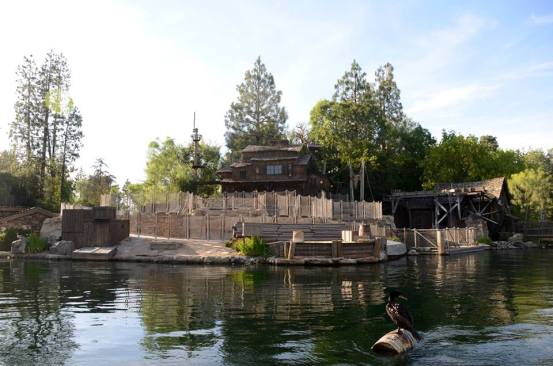 The bird on the bottom of this picture followed us around as we went in our loop.  I’ll talk about Tom Sawyer Island later on in the trip reports but it sure is fun to photograph. 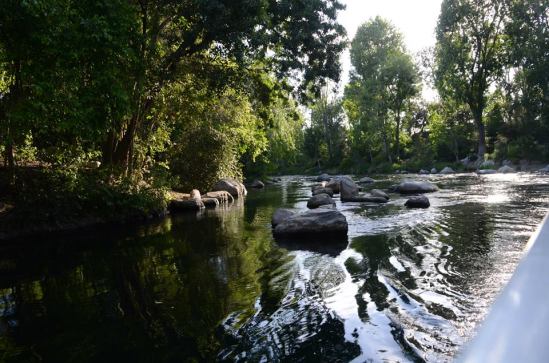 Since I didn’t remember ever being on the Mark Twain before, I was blown away by the amount I’d missed.  On one side there is Tom Sawyer Island to look at and the other side is full of more nature and places you can’t see anywhere but from the river boat. 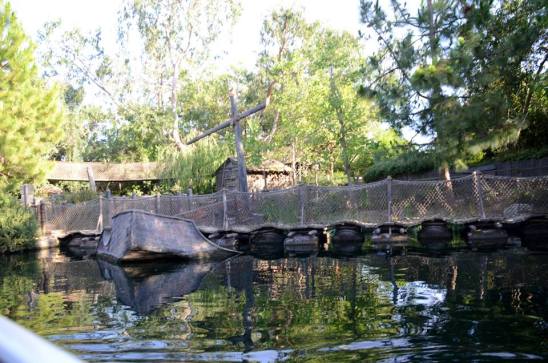 If photography interests you, then I recommend the Mark Twain River Boat even more.  There are an incredible amount of different scenes to take photos of.

After our ride was over, we went on a few more attractions and then it was time for dinner.  The afternoon’s really slip away quickly.  On this evening, Melissa and I decided to try out Rancho Del Zocalo.  This is a quick service location pretty close to Big Thunder Mountain Railroad that serves Mexican Food.

A review of the restaurant will be coming in the next month, but I was really surprised by this place.  I had read some decent things about it, but we had a very good meal there.

I think that’s where I’ll leave this excerpt of the trip report.  Next week (or the week after) we’ll pick up where we left off, moving into our evening at California Adventure and our next day’s breakfast at the Paradise Pier Hotel.  Thanks for reading and leave your questions, feedback or comments in the… Uhh, well comments!  Imagine that.

3 things (there are more than 3) that I love about Animal Kingdom:
Our latest post talks all about my lightning filled night at Disneyland! 🌩
#matterhornmonday
This guy is just constantly ready for the weekend. Turning, turning…
Name a more iconic trio! 🐊
Check out our Etsy shop @haroldsupplyco for two brand new Disneyland inspired T-shirts! The one above is our Magic Happens shirt, celebrating the parade. By the way, it glitters! 💜