Every Sunday all of our writers get together and answer a Disney related question.  Here’s this week’s question and responses:

With Christmas coming, we’ve been appointed the Christmas list makers for the Disney Parks (only in our fantasies). So, what would you add to any Disney theme park if you could? It doesn’t matter how big or small and you ask for more than one addition.

Melissa Hoyt – Personally, I can think of two different things that I would add – both to Disneyland. The first thing that I would want to add would be more space to expand. Walt basically learned the hard way with Disneyland that a popular park will draw crowds and make the surrounding area look cheap/cheesy. He took the lesson and made sure that he got plenty of space for Disney World and even with all of the additions there, they still have plenty of room. At Disneyland however, in order to build something new they have to be creative/very decisive about what they get rid or build over. It would be nice for Disney to have the freedom to expand however they want to in California. In addition, I would love it if Disneyland could have a Fantasyland expansion similar to that in Disney World. I personally haven’t been to Disney World since the expansion was finished, but it seems like an amazing place that I would love to visit. Even if Disneyland can’t have all the bells and whistles like Disney World, an update/expansion would still be awesome.

Leslie – If I could add anything it would be in a sense more space on the walkways. Let me explain. As night falls and shows begin it becomes 1) increasingly difficult to leave the parks in general (even during the day it is difficult to walk through areas during a parade) and 2) it is difficult for everyone to have a good view of just what is going on. This also adds stress to cast members when people are where they should not be. If we could expand the walkways perhaps that would make things a bit easier and Jr. would be able to wave at Mickey as he went by free of adult bodies blocking their way. This would also help preserve the magic as there would be no need to open back areas for guests to “escape” to their busses. Consider this my conservative present that offers more functionality than fun but helps make the park more fun as well.

Andrew –  I agree with Melissa and Leslie about wanting more space in the park. It seems that Disney is trying to address that (especially in Disney World) but it would really help the overall feel and make everything more pleasant.

My next pick would be to speed up the renovations at Hollywood Studios. They haven’t begun building anything new and there is hardly anything going on in that park right now. There are a few great rides and then a whole bunch of empty spaces and construction walls without anything being constructed behind them. My wish is that one of the many areas that will be undergoing renovations would speed up their timetable and open within 18 months, to help salvage that park.

I’ll be selfish and do 3. My last pick is nothing big, just a wish for a 3rd park at the Disneyland Resort. While I agree with Melissa that an expansion in Disneyland itself would be great (although I don’t love New Fantasyland, just merely like it), I think a 3rd park at Disneyland could be very natural. Yes, it’d have to be a bus ride away from the 2 current parks, but that 3rd park having Marvel and other attractions would be really cool. That park would get Disneyland noticed for all it has, and then others would notice the overall higher quality Disneyland has compared to Disney World (no offense, Disney World, I do love you).

Melissa Long – Hmmm this is a hard one for me, but the first thing that pops in my head is adding some sort of dining package to Disneyland like that have in Disney world. And o guess to go with that would be a few more sit down restaurants. I love the idea that I’ve already paid for my meals and I don’t have to worry about it once in the park and I miss that when in Disneyland.

Another thing that would be awesome, would be another thrill ride! I love them and think it would be another fun stop on the attraction list for those that like a little bit of a faster ride. And then I can sit next to Andrew on it and laugh my head off!

Kelsee – I definitely agree with adding more space to Disneyland, if only that were possible.

1) In a perfect world, I would wish all of the cheaper hotels out of the area and I wish Disneyland would have the freedom to build new/more resort hotels. I feel like the resort hotel experience is limited at Disneyland since they can’t add variety both financially and aesthetically.
2) I’d like to see a revamp of Tomorrowland at both the Magic Kingdom and Disneyland. They need a facelift in my opinion. It does not seem like the future any longer.The technology and attractions need an upgrade.
3) I wish they’d put PhillarMagic in at Disneyland just like they have it at the Magic Kingdom. I love that show, it’s a unique experience.

Let us know what your answers to the questions would be in the comments!  A recap of the week, our favorite posts around the Disney blogosphere, and a look ahead are all after the jump.

This week around the Disney blogosphere:
The Disney Tourist Blog shared some of their favorite Christmas photos from Magic Kingdom.
The Disney Food Blog took us on a tour of Trattoria al Forno, a new restaurant on Disney’s Boardwalk (in Disney World).
Celebrations Press Blog shared a list of their top-5 snacks in Disney’s Hollywood Studios.

Coming up this week at Wandering In Disney:
Monday – A look at Christmas in Disney World
Tuesday – A few thoughts on New Fantasyland
Friday – Top-5 attractions for kids under 5. 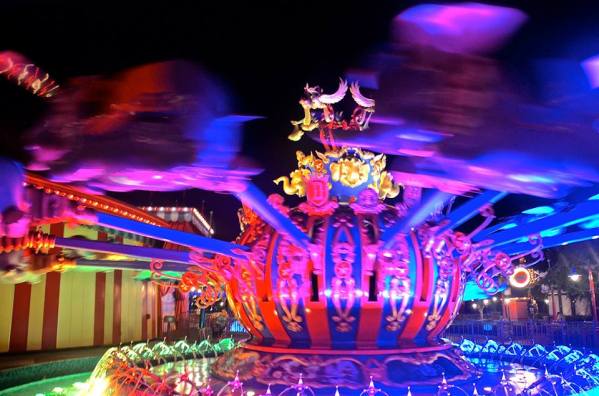 If you like what you’re reading, we’d really appreciate it if you liked our Facebook page or subscribed to our blog via email.  You can do that on the right side of this page.

While we will have posts before Christmas, I wanted to take this opportunity in a more unfocused post to wish everyone a Merry Christmas.  We appreciate every one of you reading our blog.

Don’t forget to leave your comments below, thanks for reading!